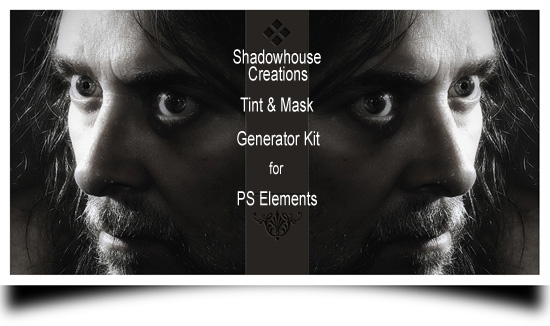 Since posting I've received some e-mails about not being able to use in PS Elements,
after scratching my head for days I decided to re-install PS Elements 9 again on my PC
"after restoring my PC to new, a chore I do once a year to clean out unwanted garbage"
decision to not install after cleaning because I rarely use it since I have several
versions of Photoshop.

After installing Elements 9 as soon as I opened the Tint
and Mask Kit I was blown away by what I saw, PS Elements
doesn't have the ability to deal with "Grouped Sets or
Folders" one of many simple tasks Adobe decided to exclude
from PS Elements.

After a few cups of coffee I decided to peruse the web in
search of answers, a clue, or at least a script to handle
the duty of ungrouping grouped sets/folders.

I discovered this simple chore has been left out of all versions
of Elements, so I began looking for a script to do what Adobe left
out, nothing free in the way of scripts, but I found a remarkable
tool to handle the ungrouping grouped sets/folder problem and a
whole lot more.  I ran across Elements+, it seems Elements+ has
the ability to handle a lot of the duties not inherited in Elements
through the use of simple scripts.

If you've not already discovered Elements+ I would strongly suggest
you visit HERE to see what it's capable of doing.

I decided to order Elements+9 which handles my version of Adobe PS
Elements 9, the site has individual versions to cover Elements 6
through 10, so if you decide to order, make sure to order the correct
version for your version of PS Elements.

Downloaded, installed, which it has it's own installer, so you won't
have to follow tricky instructions and copy dozens of files to different
locations manually.  Installation took me a minute or two, and first
run when opening Elements took a minute so the program reconstructs its
cache file, done, so curiously I open the Tint and Mask Generator Kit
in Elements 9 and followed the instructions given on how to ungroup
Folders/Sets, in a flash it ungrouped the folders Tints and Masks and
now shows all the tint and mask layers individually just as PS CS3 does
which is what I made the kit in.

If you're one who would like to have as many tools as possible from full
fledged Photoshop within Elements, I'd check it out, glad I did.


I decided to post a link to the "Shadowhouse Creations Tint and Mask Generator
Kit - for Elements, which is the same kit, only the layers are individual
and not grouped so you will see all the layers stacked when opening the file.


Hope this helps those using Elements and wanting to use.

Thanks for stopping in and commenting.